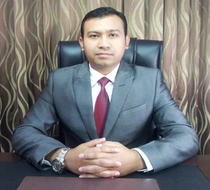 Mr. Ragesh Keisham - A United Nations – UNCTAD – Empreteco, is a first generation entrepreneur who has dedicated his life to an elemental dream 'to nurture the wealth of Manipur’s rich soil and channelize it towards bringing prosperity and development to the region'. Armed with an Executive MBA, Ragesh set out to raise the initial investment for funding his dream in 2004. Efforts to raise the ballpark primary fund were no longer consuming his waking hours and the desire to create a unique model of discovery and growth was burning ever brighter. Over the next 15-18 months, Ragesh buried himself in research and brainstormed with experts from varied fields related to agriculture.

During his discussions with many scientists, he was very impressed with the numerous therapeutic benefits of Cymbopogon citratus. As lemongrass grows wild in the land of jewels Manipur, a very high yield was predicted for Cymbopogon citratus. Due diligence revealed that Ragesh’s quest had finally found a direction and he launched The SuiGeneris Inc., a privately owned sustainable development enterprise that imported 10,000 saplings of superior quality Cymbopogon citratus from Indonesia in 2008.

Though its consumption as tea is said to trace its roots to early Egyptians (around 2 B.C.) and many alternate schools of healing actively rely on its therapeutic abilities, Cymbopogon citratus is a dense plant with stiff challenging leaves. The next two years witnessed many wasted harvests and an unrelenting struggle for striking the right balance. An additional two years were required for further research and for tuning the growth cycles, harvesting, cleaning, drying, cutting and grinding processes.

On 21st August 2011, The SuiGeneris Inc. manufactured and launched CC Tea, a naturally caffeine-free instant lemongrass tea. Prepared exclusively from the leaves of Cymbopogon citratus aka fever grass; the zesty, clean and tangy flavors of this pure tisane are soothing yet refreshing. By mid-2012, the company had developed the first prototype for automating its toughest manual task. Fondly referred to as the ‘Chopper’ by Ragesh and the fabricators, this unique machine was equipped with high quality SS blades for tackling the hardy leaves of Cymbopogon citratus. Today, the company uses a much more advanced proprietary model, specially designed and tweaked for the purpose.

A pioneer in the field of green revolution, The SuiGeneris Inc. currently owns and manages a pristine 250-acre plantation of Cymbopogon citratus in Imphal. It has acquired an additional 500 acres for cultivation and is expanding production to meet the ever growing demand for CC Tea.

Ragesh Keisham’s vision and leadership have paved the way for a unique model of development and he is heralding a socio-economic revolution in Manipur. Under his able leadership, The SuiGeneris Inc. has grown from 2 to 2000 workers and is actively empowering thousands of families across Manipur. The company’s first product line CC Tea is approved by FICCI and is garnering curiosity from global traders across Europe, US and UAE.

As a part of our Corporate Social Responsibility, we have started a campaign called ‘Plant a Million Tree campaign’ where we have pledge to plant a million trees and spread awareness on Global Warming and Climate Change. As the world is inflicted with this dreaded problem called Global Warming, we at the SuiGeneris take it as our responsibility to save Mother Earth and make it a better place to live.

As the social situation of Manipur remains no secret to the general masses, this social unrest resulted in further chaos in the society leaving many without a home to live, lamenting mothers whose sons are dead in this conflict, helpless wives whose husbands are long dead in this chaos. When we talk about Women Empowerment, we believe these are the women who need to be supported and empowered. They are the neglected sections of the society who are struggling for survival for no fault of theirs. We at the SuiGeneris are proud to make this statement that we are empowering 2000 underprivileged women, who otherwise would have been lost in their war of survival without a trace, by giving them employment in our factory and farms. We help them make independent decisions on their personal development and shine equally in the society. Our company believe in eradicating poverty by providing employments to the people thus keeping peace in the society as a whole.